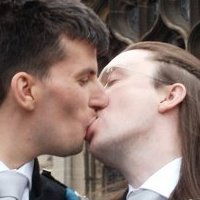 On Facebook, as with the rest of my life, I am openly gay and I am openly Christian. For example, updates to this blog are published automatically into my Facebook news feed.

For a while now, I’ve been in a relationship with another man, Michael, and on the 6th and 7th May we got married. Lots of friends and family were there, and lots of photographs were taken. On Sunday morning I changed my Facebook profile picture to one of the two of us kissing outside the church – you can see the picture yourself at the top right of this post.

During the day on Sunday, I got the following message from a Facebook friend we will call Q.

I am happy for you if what you have done is what you want. I have nothing against you or any other person, but I do believe the thing you have done to be an abomination in God’s eyes, so feel obliged to remove you from my friends list. I do this with great sadness, but still rejoice in your happiness and pray that God can find the way take you to the kingdom by His love. This may mean that my view is still too narrow, but I see the scriptures on the issue as pretty clear. Your latest profile pic was the last straw I am afraid.

This does not mean I no longer love you and care about you, just that I feel obliged to make a stand against what you did today.

But if you can tolerate an openly gay Christian man as a Facebook friend, what scriptural reason is there for unfriending him because he has entered into a permanent, faithful, stable lifelong relationship? Where in the Bible does it say that marrying another man is “an abomination in God’s eyes”? Q wasn’t objecting to me being in a sexual relationship with another man, because his message was about a specific event — “the thing [I had] done” — not some (assumed) aspect of my relationship with my husband.

This actually exposes ‘Christian’ opposition to same-sex relationships for what it is: homophobia, thinly veneered with Christianity in an attempt to make it respectable.